This section provides downloads and links to articles, papers, reports and diagrams, plus relevant and related guides.

The project deliverables will also be accessible here, and shall be added to whilst the project progresses. 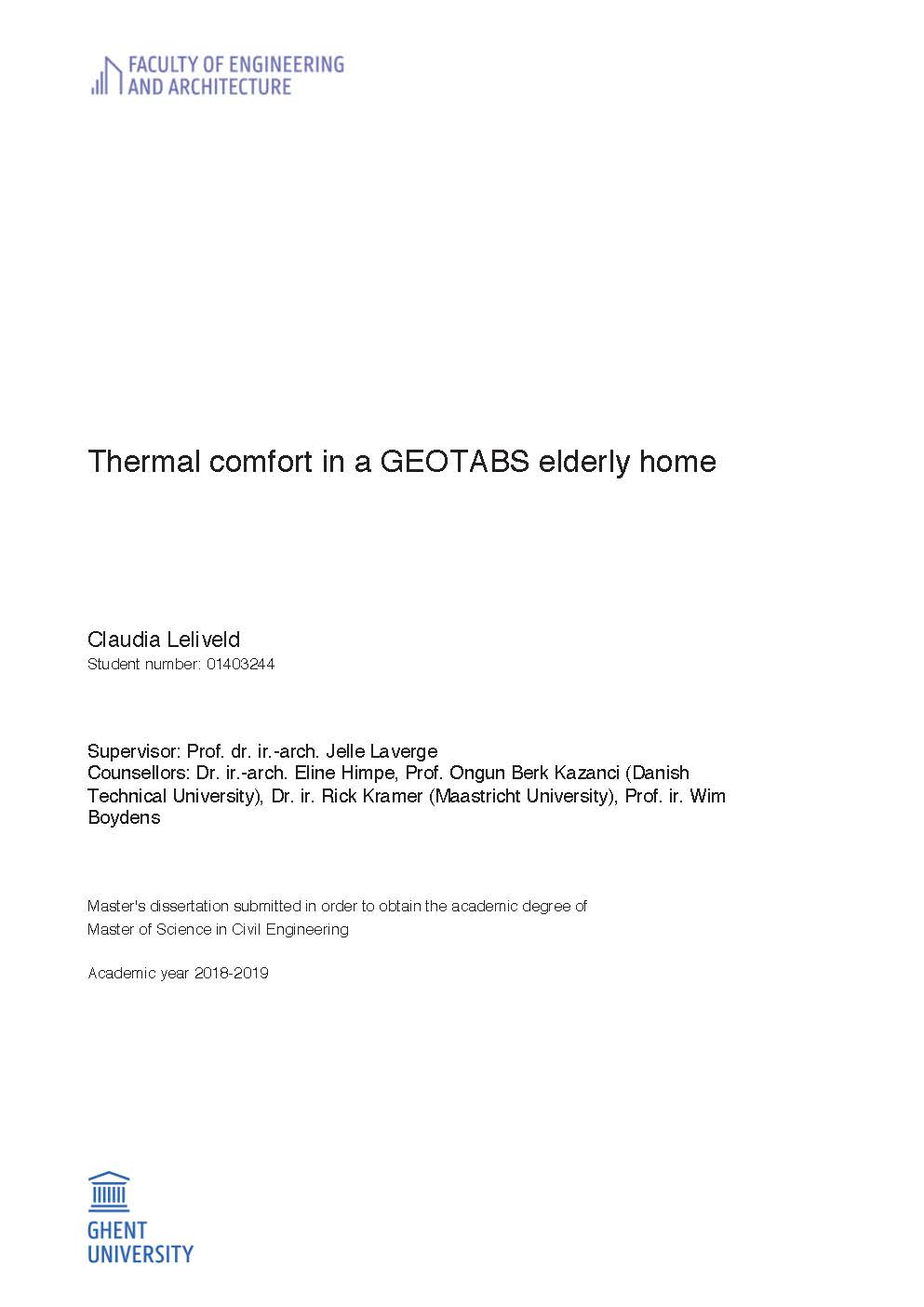 THERMAL COMFORT IN A GEOTABS HOME FOR THE ELDERLY

Abstract
GEOTABS buildings use geothermal energy to heat and cool the building by use of a heat exchanger and heat pump. This energy eﬃcient method can possibly partly give an answer to the changing climate. The thermally activated building system (TABS) are hydronic pipes embedded in the building structure that exchange heat to and from the surrounding concrete in order to heat or cool the rooms. This type of radiant heating and cooling should at the same time provide a comfortable thermal environment. As this system uses moderate supply temperatures and large surfaces for heat exchange, it is expected to be able to create a rather uniform indoor environment for a long time. This technology is up to now mostly present in oﬃces, but research is going on in order to implement it in more types of buildings. This thesis wants to examine if GEOTABS and elderly homes can form a good combination. Therefore research is ﬁrst done to ﬁnd what thermal comfort is and how it can be established. In addition, information is looked for to see if elderly experience thermal comfort the same way as younger people or not. In a new elderly home that uses GEOTABS, measurements are done and questionnaires are gathered to gain insight in the existing thermal environment and the experience of the residents. This data is then compared to the stated beneﬁts of TABS concerning thermal comfort and to the design criteria of thermal comfort models. Multiple advantages of radiant heating and cooling systems could be recognised and above all most of the elderly felt comfortable in the elderly home. Nevertheless some improvements can still be made to create an even more comfortable environment. Based on all this information it can be conﬁrmed that GEOTABS are suitable for use in elderly homes. 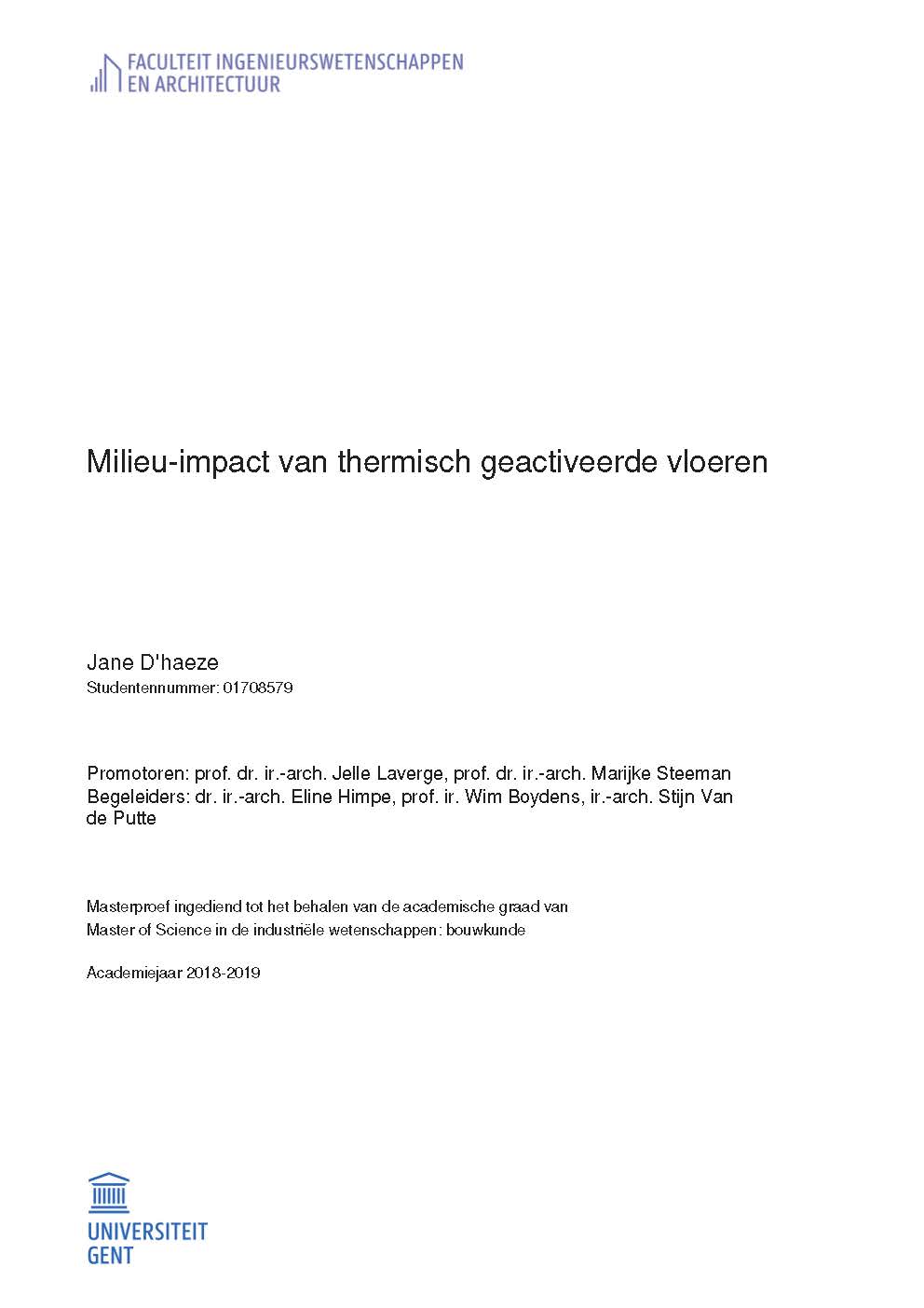 In this paper, the environmental impact of thermally activated floors is studied in order to define if this type of emission system is a sustainable technology. The environmental impact is estimated using life-cycle impact assessment, more specifically with the MMG-method. In the process of examining thermally activated floors, three sub-studies are carried out. Firstly, the environmental impact of the building materials in a storey floor are examined by layer. Secondly, different floor compositions, with or without integrated radiant heating or cooling, are assessed. Thirdly, an impact assessment for both material and energy use is made for three common scenarios, where a system with concrete core activation is compared to two conventional heating and cooling systems, in an office building. 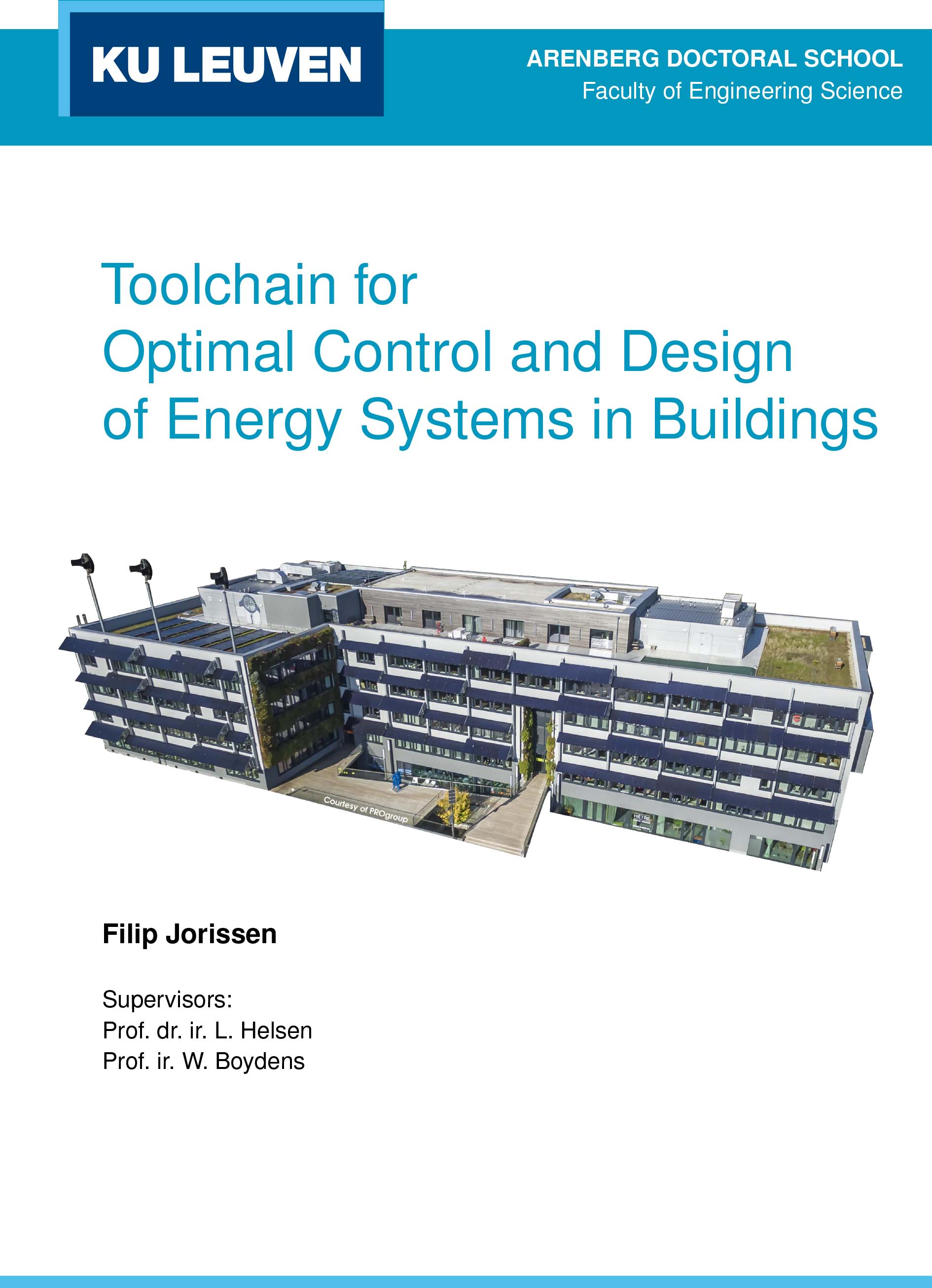 TOOLCHAIN FOR OPTIMAL CONTROL AND DESIGN OF ENERGY SYSTEMS IN BUILDINGS

PhD Thesis April 2018
Author: Filip Jorissen
KU Leuven, ARENBERG DOCTORAL SCHOOL Faculty of Engineering Science
Supervisors: Lieve Helsen, Wim Boydens
A large potential exists to improve the current practice of HVAC design and operation of buildings with respect to occupant comfort, energy use or energy cost, and investment costs for design and construction. More speciﬁcally, design and control processes can be improved through the use of contemporary optimisation algorithms such as Model Predictive Control (MPC). Numerous papers have demonstrated the value of MPC using both simulation and demonstration projects. Practical implementation of MPC in industry is however hampered by the expert knowledge and time investment that is required for developing MPC controller models and algorithms. An MPC development methodology that is both practical and scalable to large problem sizes has not been demonstrated to date. Moreover, design studies typically do not take into account the interaction between control and design.
This PhD thesis therefore proposes a user-friendly, object-oriented method-ology for integrated optimal control and design of buildings. For this methodology, modelling experts develop generic, detailed, but easy to use component models for optimal control problems using the object-oriented modelling language Modelica.
Download the thesis 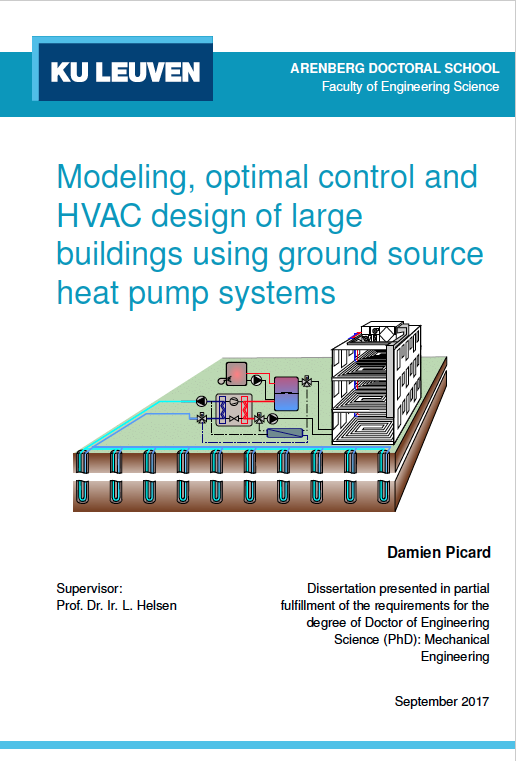 PhD Thesis September 2017
Author: Damien Picard
KU Leuven, ARENBERG DOCTORAL SCHOOL Faculty of Engineering Science
Supervisor: Lieve Helsen
Since May 2010, the directive 2010/31/EU of the European Parliament compelsits Member States to drastically decrease the energy use of buildings, to increasetheir energy efficiency and to increase the relative amount of renewable energythey use. One of the technologies recommended by the directive is the heatpump which efficiently uses electricity to extract thermal energy from a heator cold source. In this work, buildings equipped with the particularly efficienthybrid GEOTABSsystem are considered, consisting of a ground source heatpump (GSHP) coupled to a thermally activated building structure (TABS)system and optionally extended with a gas boiler, radiators or other auxiliarysystems. The main objective of this research is toimprove the thermal comfortand the energy efficiency of large hybrid GEOTABS buildings by applying modelpredictive control (MPC) and to improve their economic viability by optimizingthe size of the GSHP and of the auxiliary systems as well as the type of theauxiliary systems to install.
To this end, Building Energy Simulation (BES) models of an existing office building, a school, a retirement home and a block of flats were created usingand extending the open-source Modelica libraryIDEASto represent a wide setof hybrid GEOTABS buildings. The models include the building envelope, theheating, ventilation and air conditioning (HVAC) system, the occupancy and adefault rule-based building climate controller (RBC). Additionally, a method tolinearise the building envelope of the developed Modelica models was developedin order to obtain highly accurate controller models for MPC. The methodautomatically precomputes the non-linear equations which do not depend on themodel states and linearises the other equations. The obtained controller modelsare then used by a toolchain which semi-automatically generates a linear MPCand tests its control performance on a full year simulation of the developed BESmodels. Finally, a python tool was created to optimize the economic viabilityand CO2emissions of hybrid GEOTABS systems.
Download the thesis 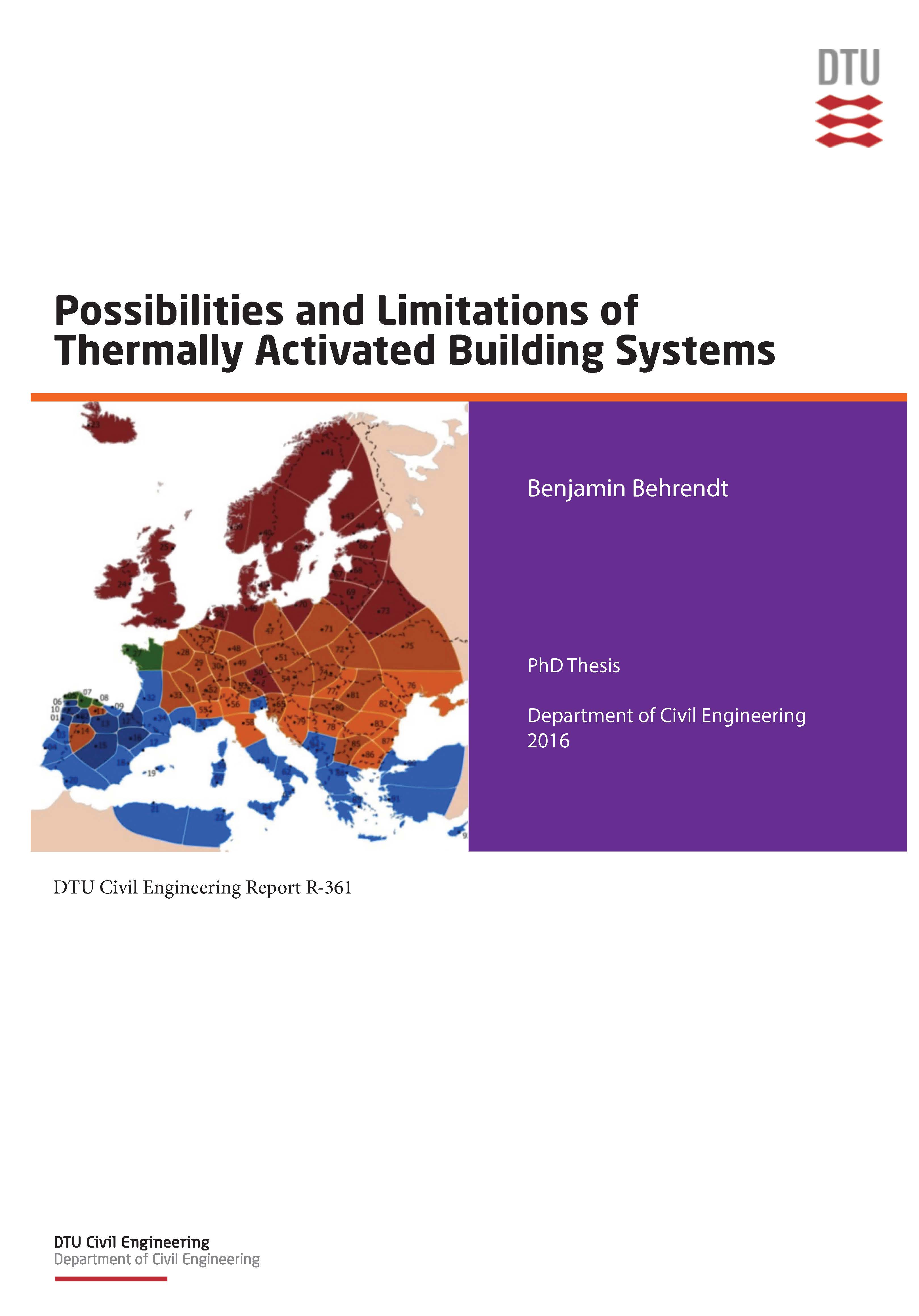 Benjamin's PhD study at DTU investigated the potential of using TABS in different climates in Europe. It could be a useful source of information for those working with TABS systems and integration within the hybridGEOTABS proposal.